The deadly 2002-2003 SARS outbreak remained an epidemiological mystery for over a decade. The source of the disease — which killed 774 people worldwide — was unknown, and there was no vaccine.

Finally, in late 2017, a team of Chinese scientists traced the virus back to a population of bats in a remote cave. As one SARS expert told The Guardian, samples from these bats will make it much easier to develop a vaccine and prepare for future outbreaks.

The great SARS mystery illustrates an often overlooked truth about problem solving: Finding the source of the problem is the key to finding a good solution. It’s also a lesson for HR leaders looking to treat a viral event of a different sort: turnover contagion.

Turnover contagion happens when people quit their jobs simply because other people are talking about leaving, job searching, or actually jumping ship.

As emotional contagion researcher Sigal Barsade writes, employees “routinely ‘catch’ each other’s feelings when working together in groups.” This can impact the decisions people make, including whether to quit. An academic study published in 2009 found that coworkers’ job embeddedness and job search behaviors “explain variance in individual voluntary turnover over and above that explained by other individual and group-level predictors.”

In other words, voluntary turnover doesn’t just happen in isolation due to an individual’s job satisfaction issues.

The origins of turnover contagion can be difficult to pin down (particularly in highly networked organizations), but the effects can be significant: The average cost to replace an exiting employee is $109,676, according to Bersin by Deloitte research. An increase, then, of turnover by just 1% in a company of 30,000 employees can cost $32.9 million per year.

Granted, not all turnover is bad — such as when weak performing employees leave — but when people, particularly top performers in critical roles, start quitting in rapid succession, it’s definitely going to negatively impact overall productivity and the bottom line.

To find the source of turnover contagion and curb its effects, HR leaders thankfully don’t have to go on treacherous hikes through remote caves or rely on subjective anecdotes and gut feel.

Instead, HR can take a more data-driven approach to pinpoint the problem, predict risk of exit for individuals, and plan for the most vulnerable situations.

Here are four ways you can curb turnover contagion in the workplace using a data-driven approach:

#1: Determine Whether Turnover is a Problem

Turnover rates are often significantly higher in one group than in the overall employee population. To determine if you have a turnover problem, use people analytics to look at your turnover rate and drill down by role, regions, teams, and departments.

What’s normal for one group may be unusual for another, but a good rule of thumb is that if you see an increase in voluntary turnover by 3-5%, something is amiss.

To determine whether you have a case of turnover contagion on your hands, look for a few specific things:

Yes, turnover may be due to external market factors that are outside your control. But if benchmarking data indicates that your industry peers have far better retention rates than your organization, then it’s clear that you own the problem.

#2: Uncover the Why of the Problem

When you uncover why turnover is on the rise, retention initiatives can then be more thoughtfully designed to address root causes. As one HR VP put it, it’s ”the difference between carpet bombing and using laser-guided missiles.”

For all turnover situations, this means analyzing resignation drivers to determine what factors increase and decrease resignations. It also means looking at resignation correlations (how resignations are affected by things such as compensation ratio, promotion wait time, pay increases, tenure, performance, and training opportunities).

There are also a few specific things to look at when you have a case of turnover contagion. Look at key factors relating to the population that is leaving: Are they employees who are attractive to other businesses in your area? Do they share a supervisor with a low approval rating? Are they all working on the same project?

As you go through the data, keep in mind that performance differentials do matter:

It’s clear, then, that designing “vanilla” retention initiatives to retain everyone should be avoided. Large organizations often find that, when programs are more targeted, the overall turnover rate decreases significantly.

There is a way to stop turnover contagion from even happening in the first place. If you can identify potential sources of the spread (well-connected people who pose a flight risk) you can then be proactive about minimizing their chances of leaving and take steps to manage those around the flight risk person.

This is where predictive capabilities can be of benefit; if you wait for annual engagement surveys, it may be too late to do something about it.

Predicting risk of exit can involve some pretty sophisticated technology, but the process is straightforward: A profile of the organization’s talent who left in the past is created, which can then be used to identify similar characteristics in existing employees.

Once you understand who is likely to leave, you can go one step further and identify those who have close ties to the individual. This is where data gathered from sociometric badges — which identify informal team relationships — can be a help. Otherwise, examining project team data can be of benefit.

HR can then share this information with line managers, who can then have conversations with individuals who are at risk of leaving and those who are likely to be influenced by that person’s departure.

As described in this article, epidemiologists use various data — including insect populations, human demographics, and airline routes — to model outbreaks during a high risk situation, such as when air travel peaks during the American Thanksgiving. Health teams then use these maps to plan responses.

In the same way, HR can plan a response to minimize turnover contagion when a high-risk situation is on the horizon. With the digitization of the entire employee lifecycle, from sourcing to offboarding, it’s now possible to aggregate data from multiple sources to model several scenarios.

For example, let’s say your organization is planning a major M&A deal. According to Bersin by Deloitte, “many merger and acquisition (M&A) deals have inherent retention issues resulting from negative attitudes often felt by employees, including survivor guilt due to downsizing of other employees.”

With this in mind, you can craft retention programs for those employees who drive the sources of value. It may be impossible to avoid turnover contagion entirely, so you can also account for a higher level of turnover in your workforce plan, potentially making the argument for fewer job cuts.

Look for technology and tools that enable you to create and compare different workforce planning scenarios (each with different workforce movement and cost assumptions) so that not only can you choose the best option for your organization, you can have contingency plans in place.

The Value of a Laser-Focused Approach to Turnover Contagion

The idea that people rely on others to help define reality in ambiguous situations has long been one of the main principles of social psychology. Indeed, the business world is getting more volatile and uncertain, which may be leaving us more prone to the influences of the people around us.

No employee is an island. But this is how people are often presented: as isolated line items on a spreadsheet. When data is gathered and interpreted from the entire employee ecosystem, we gain a much clearer picture of how turnover contagion starts, and as a result, we see how it can be treated and prevented. 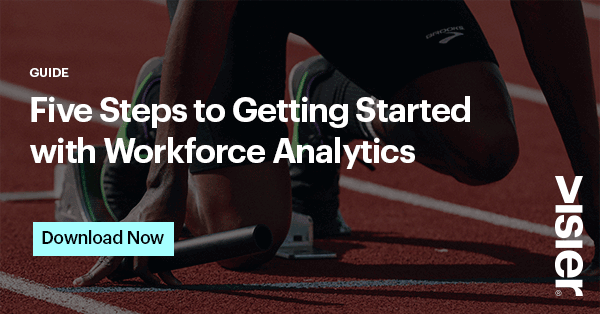 About the author: Ian Cook

Ian is an advocate for the crucial role that people play in helping companies thrive. His career has focused on enabling people, teams and companies to perform at their best. For the last 15 years Ian has been helping leaders elevate their HR strategies and programs through the effective use of people analytics. At Visier, Ian led the development of our market leading solution and is now focused on the overall strategy for the people analytics business.

Visier People™ uses predictive people analytics tech that are up to 17 times more accurate than guesswork at predicting risk of exit, and movement.
TRENDS

We’ve gathered a list of the top 2018 people analytics and workforce planning conferences for data-driven HR leaders of all skill levels.
TRENDS

A HR technology rollout can be daunting, especially when combined with having to train colleagues to use this new tool - there is a lot of pressure to get it right. If users feel frustrated and uncertain while using a new tool, such as a workforce intelligence (WFI) solution, they may return to the old methods of figuring out their HR data despite how antiquated or cumbersome they are.