Performance and Rewards: Differentiate Only When It’s Worth It

Should you encourage managers to differentiate performance and rewards among workers? The typical assumption is that more differentiation is better. Merit-based rewards are seen as a hallmark of a “high performance culture.”

Should we rethink the idea that differentiating performance and rewards is always good?

Economists have reviewed research on whether wider individual differences in total pay relate to better performance, and the evidence is inconclusive. Some studies find a positive relationship, others a negative relationship (especially in collaborative situations), some a hump shape with a “sweet spot” in the middle, and others studies a u­-shape with a “sour spot” in the middle.

One study of major league baseball teams between 1985 to 1993 found that both individual player and team performance were lower when there was greater pay differentiation. Other researchers have found similar results in baseball and hockey. The impact of differentiation on retention is however more uniformly negative.

Assuming that differentiation is always beneficial, or at least does no harm, is not supported by research. How can you differentiate where it does the most good and the least harm? 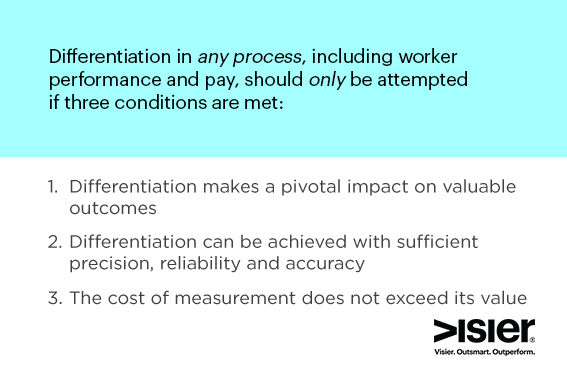 Regarding condition #1, The “return on improved performance” or ROIP from good to great is not always significant, as with commercial airline pilots, where the key is to meet a high performance standard, but not to show who is “top gun.” Most organizations need financial reporting accountants who get their reports done accurately and on time, but do not need them to compete to show who is most innovative.

Don’t assume that performance increases in every job are valuable. Sometimes “good enough” is the optimum goal.

Regarding condition #2, performance ratings are prone to bias and unreliability. One research review found only between 8% and 32% of the variation in performance ratings is due to individuals and their achievements. People’s observations and judgments can be very inaccurate and performance appraisal research shows people display biases and take shortcuts that interfere with their judgments. Supervisors also have many agendas and aren’t always motivated to rate performance accurately. Factors beyond the control of the employee can also influence their performance, leading to errors in performance judgments. Finally, efforts to improve performance ratings through scale improvements, rater training, calibration processes, 360 degree feedback, and forced distributions have not met with much success.

Regarding condition #3, the costs of differentiation are significant. At a recent conference several performance management professionals in large companies said that reducing performance differentiation saved millions of dollars per year in direct system costs and worker and manager time. Systems to measure and differentiate performance are costly to put in place, especially if there are technology applications involved. The time and effort required of employees and supervisors is significant. Then, there are the billions of dollars that are riding on performance measures. The cost and management attention required to manage a pay­-for­-performance system is enormous.

Don’t assume the costs are trivial.

Differentiate Performance and Rewards Only When It Definitely Pays Off

Merit­-based systems that differentiate performance and rewards are undoubtedly valuable when they work, but leaders often strive for differentiation without question. Even when organizations modify their systems to remove the requirement to rank or rate employees, managers still assume they are expected to differentiate rewards, so they use factors other than performance (such as judgments of potential, agility, or cultural fit) that may be even more problematic.

Yet, research suggests that these three essential conditions are met only in certain circumstances. When they are not, it may be better not to differentiate performance and rewards, or to differentiate only very broadly. Juniper Networks not only abolished forced rankings, it seeks simply to have what it calls Best Talent. More than 97% of its employees are considered Best Talent, and Juniper’s talent management efforts focus on putting the right capabilities in the right places to achieve its business goals.

Perhaps a better approach is to make differentiation the exception not the rule, and use it only where it clearly pays off. References supporting these ideas are available at this link.

John Boudreau is professor and research director at the University of Southern California’s Marshall School of Business and Center for Effective Organizations, and author of the forthcoming books, “Lead the Work” with Ravin Jesuthasan and David Creelman and “Global Trends in Human Resource Management” with Edward E. Lawler III.

Alan Colquitt is the Director of Global Assessment and Workforce Research at Eli Lilly and Company in Indianapolis, IN. Alan has written and presented widely on the topics of performance management, performance ratings, and pay­-for-­performance.

Here are four scary employee engagement situations to avoid, along with handy survey analysis tips that can help you foster a motivated workforce.
HR NEWS & TRENDS

If you could only bring two things to HR Tech World Congress in Paris, what would they be? My answer: A pack of throat lozenges and really, really comfortable (but stylish) shoes.
CULTURE

To fix a flawed retention program, HR teams need to move up on the analytics ladder to exploratory, predictive, and guided analytics rungs. Learn how.