VANCOUVER, BC – Visier, the innovation leader in workforce analytics and planning, announced today that it will be launching a billboard advertising campaign to entice Vancouver’s best software developers and tech talent to apply for jobs at the rapidly growing startup. The billboards will be posted at three locations throughout the city starting next week. 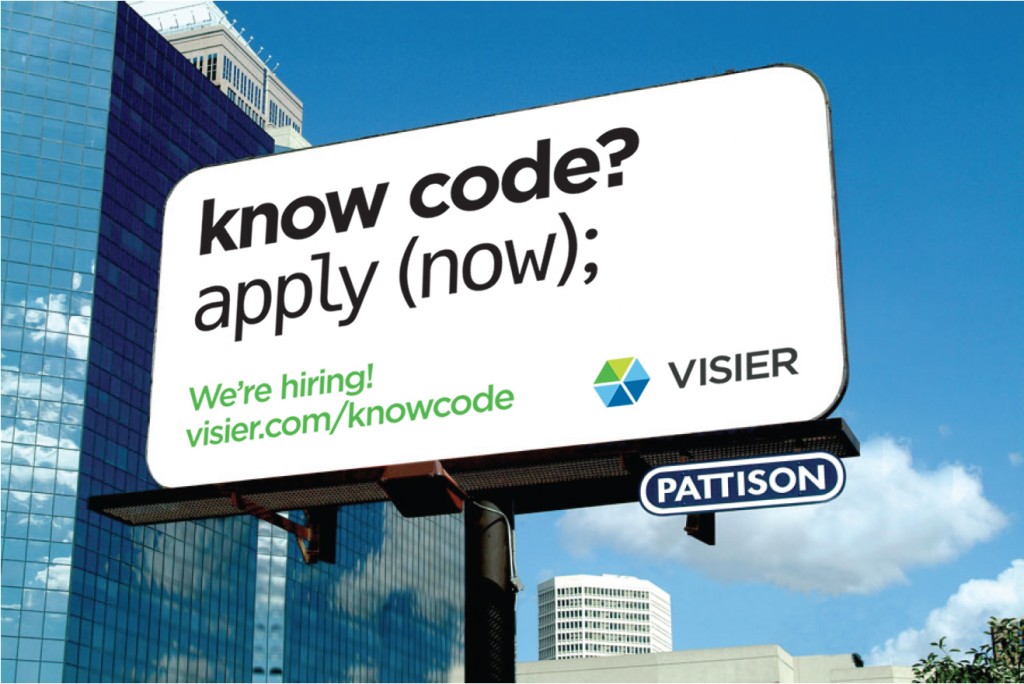 The billboard advertising campaign is part of Visier’s overall push to attract star talent across all disciplines. The company is tripling the size of its workforce over the next year to meet the growing demand for its existing Applied Big Data solutions, and to innovate new solutions in high growth areas. This will create 120 new positions at Visier over the next year, 90 of which will be at Visier’s Vancouver headquarters, with at least 60 of these new positions covering technical fields (including software developers, QA engineers, and project managers).

“We want passionate, deep thinkers who are excited about pushing the bounds of innovation, and creating a technology legacy in Vancouver. Because top tech talent is in demand, we need to rise above the sea of technology job opportunities in Vancouver and get noticed by the right kind of people who will thrive in our environment,” says Dave Weisbeck, Chief Strategy Officer, Visier.

“We are a rapidly growing startup with an expert team in place that has a proven track record of building world class software,” says Ryan Wong, Chief Technology Officer, Visier. “This is a unique opportunity for tech talent to work closely with experienced and innovative leaders, who have done this before.”

To give potential candidates the opportunity to speak with Visier staff, mingle with pioneers in the analytics industry, and get a feel for what it’s like to work in an exciting startup environment, the company will be hosting a gourmet BBQ on August 21st. Attendees will be able to sample BC’s finest craft beer and wine on the 4000 square foot patio of the company’s Vancouver headquarters. Skilled students and professionals with backgrounds in software development, data analysis, marketing, customer success, or UX design who are seeking new careers can check out Visier’s current job openings here.