SAN JOSE, CA and VANCOUVER, BC – April 10, 2018 — Visier, the recognized leader in people analytics and planning, published the latest results to its ongoing study into gender equity. Despite significant media attention, large US employers are not making collective progress towards closing the gender pay gap. Visier Insights’ latest brief, released in recognition of US Equal Pay Day — a day dedicated to raising awareness of the gender pay gap that symbolizes how far into the year women must work to earn what men earned in the previous year — found that women under age 40 earned in 2017 an average of 79 cents for each dollar earned by men, compared to an average of 81 cents per dollar in 2015. Women over age 40 earned 72 cents per dollar in 2015 and 73 cents per dollar in 2017.

“What is surprising to learn is that, despite the great awareness of the gender equity issue, there is evidence that we have lost ground on this important measure of equality,” says John Schwarz, Founder and CEO, Visier. “These findings should be a wake-up call to business leaders, who should ensure their HR organizations are providing them with an unvarnished, accurate, and detailed view into gender equity, and how it is changing across their enterprise or industry.”

The full brief can be found here, which includes graphics and recommendations for business leaders to take action to close the gender equity gaps in their organizations. The data analyzed for this brief focused on large US-based employers, and included 60 companies representing 1.5 million employees. 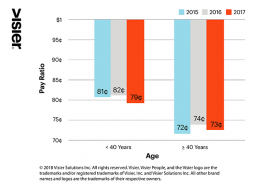 While the pay gap widens, women are outperforming their male colleagues

The lack of improvement in the gender pay gap comes at a time when women are significantly outperforming their male colleagues. When comparing the performance ratings of men and women in 2015, 2016 and 2017, women are increasingly achieving top performer status more frequently than men. In 2017, women were 21% more likely to achieve top performer status than men, compared to 12% more likely in 2015. For managers, the growth  in the gender performance gap was even greater, as female managers were 22% more likely than male managers to be rated as top performers in 2017, up from 7% in 2015. 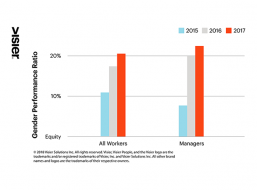 Age plays a role in promotions

Despite the higher likelihood of women being top performers, there is a considerable gap between the proportion of men who are managers versus women who are managers. In 2017, 18% of men  held manager positions compared to 12% of women. Given that managers, on average, earn two times the salaries of non-managers, this gap contributes significantly to the overall gender wage gap. In 2016, Visier released a report on this phenomenon known as the Manager Divide.

Companies included in this report represent a wide range of industries, including Healthcare, Technology, Financial Services and Insurance, Energy and Manufacturing. For each of the included companies, Visier ensured a high degree of confidence in the data availability, quality for the topics and time period being covered by the report.

Do you have more ideas? Share them with @Visier or use #VisierInsights.