SAN JOSE, CA and VANCOUVER, BC – June 21, 2016—A new study from Visier, the leader in Workforce Intelligence, has found that mothers in the US continue to pay the price in career advancement and wages for starting a family. The Visier Insights™: Gender Equity report, published today, uncovers a direct correlation between the Manager Divide, a growing underrepresentation of women compared to men in manager positions from age 32 onwards, and a widening of the gender wage gap for large US employers. The report finds that eliminating the Manager Divide, which coincides with the years in which women typically have children, would cut the gender wage gap by nearly one third.

“Every CEO should be looking at gender equity,” says John Schwarz, Founder and CEO, Visier. “Countless studies have shown the equal economic contribution women make in the workforce, yet companies have struggled to achieve the goal of equity in compensation. With this Visier Insights report—made possible by the contribution of our customers to our unique workforce database—we give leaders the factual basis on which to implement programs that can accelerate gender equity. It turns out that the gender inequity is not just a compensation issue, it is a problem of unequal participation of women in the higher paying managerial jobs.”

Numerous studies highlight that the gender wage gap cannot simply be explained as “unequal pay for equal work.” Rather, they have proven gender pay inequity to be a systemic challenge where women as a whole earn less than men on average, and do so across education levels and occupations.

As discovered by Visier Insights, the gender wage gap is driven by the Manager Divide: gender inequity in manager positions that is closely tied to the childcare years, when women experience increased demands from their home life.

“Having a child shouldn’t undermine the earning potential of women, but our study shows that it still does,” says Schwarz. “I believe employers today have good intentions to achieve gender equity, but have been lost in chaotic and conflicting data sources. Business leaders need to be  making decisions based on confident knowledge, not on guesswork. We at Visier are on a mission to enable that.”

Based on analysis of a workforce database representing dozens of large U.S. enterprises, the Visier Insights study found:

Read the blog: Overcoming the Manager Divide: How to accelerate the path to Gender Pay Equity. 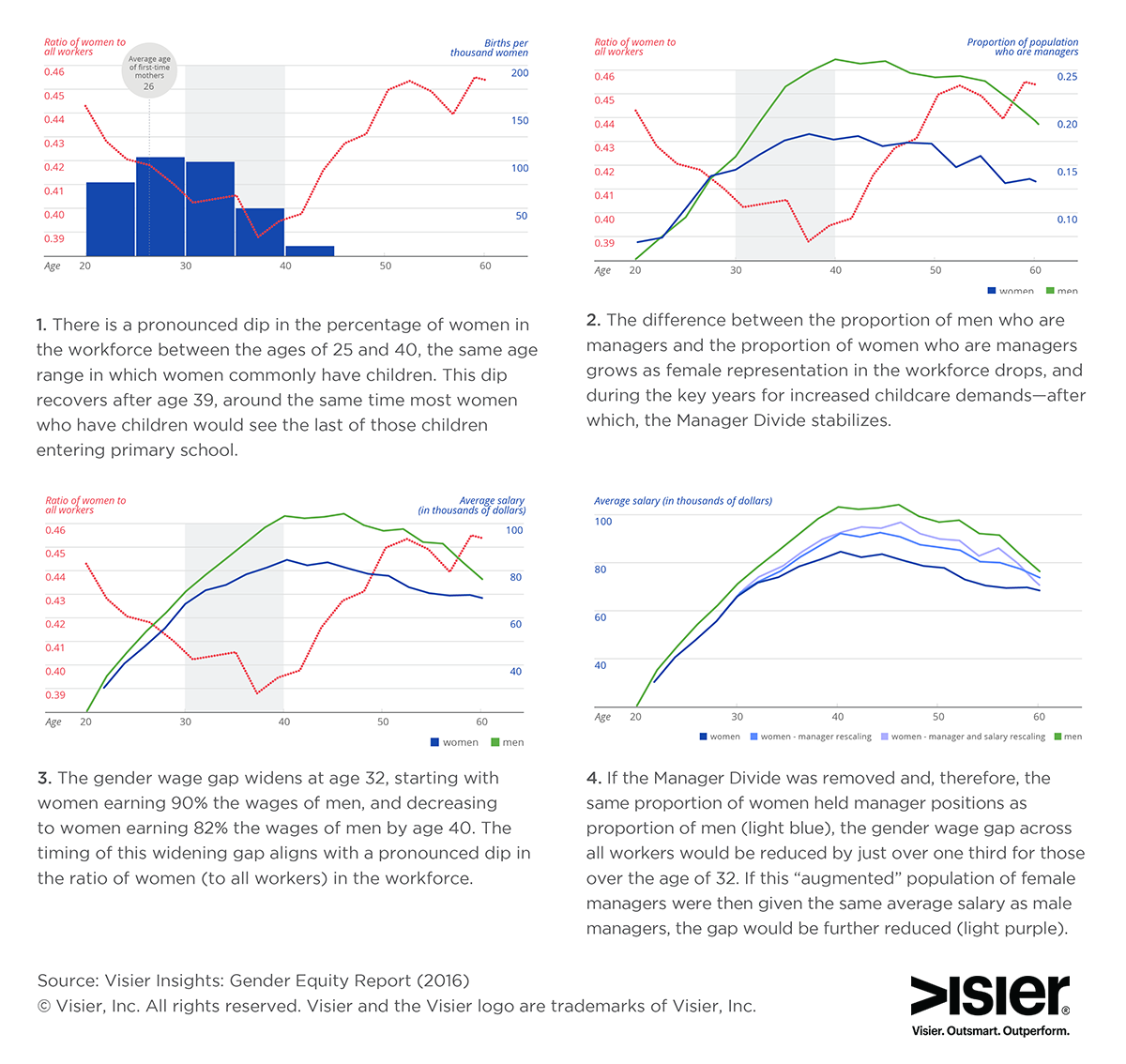 Slashing the Gender Wage Gap by closing the Manager Divide

There are a number of important steps employers can take to make meaningful progress towards closing the gender gap.

Do you have more ideas? Share them with @Visier or use #VisierInsights.