Taking on the Giants: 3 Considerations for Tech Entrepreneurs

For tech entrepreneurs, the Information Technology industry is a wonderful place to make your living. No matter how large and well financed your competition may be, they all have the same Achilles heel: new ideas and the drive to make them a reality. The innovator’s dilemma is alive and well in high tech.

All new IT offerings I have experienced over my four decades in the business have followed Geoffrey Moore’s technology adoption curve. The early adopters like to lead the pack in testing the usefulness of new things. Then, assuming these pioneers prove the worth of the new idea, the early majority jump on the bandwagon to ensure that they are benefiting from the innovation, and finally the rest come in when it is no longer deemed safe for one’s career to stay with the dinosaurs. Eventually, even the real laggards have no choice but to move over — typically when their supplier will no longer support the old solutions. And, of course, the process repeats with every crank of the innovation cycle, which is getting shorter with every generation.

There is no law that says that the current market leader cannot be the innovator. In fact, most new tech inventions are discovered in the labs of the major players. However, their business model constrains their willingness to pursue the innovation with the single-mindedness of a start up.

IT inventions typically also share Gordon Moore’s law – they deliver two times the performance at a half of the cost of the generation of technology they replace.

The impact of the second Moore’s law is that new technology offerings must generate 2 to 4 times the volume of sales to maintain the revenue stream from the previous generation. This makes it very hard for established players to aggressively drive innovation into the market – it hurts their own income statement, at least in the early part of the cycle. It is a hardy business leader indeed who has the fortitude to cannibalize his/her own business in the hot pursuit of innovation.

Entrepreneurial Advantage and Acceptance of Risk

Here is where the opportunity for a start-up comes in. The new entrepreneur has no business that can be cannibalized. They have no public shareholders who demand a predictable profit performance curve quarter after quarter. They are backed by venture capital that is used to make large bets on uncertain outcomes. They have the advantage of knowing that the market wants a solution to a business problem if it can be produced at a quarter of the current cost. And with the exception of the microchip technology, the tech industry requires little capital equipment to deliver a new solution. One only needs a great idea, an innovative and imaginative engineer, a financial backer and the energy to call on countless prospects to make them share your vision.

It usually takes the established players two or more years and several significant customer losses to recognize the threat of the innovation and begin to respond. Even then, given the lead-time needed to catch up, they often have no alternative but to acquire the innovator’s business.

Visier is an interesting case in point. Visier is a cloud-based provider of people analytics solutions, in essence providing insight for management about their workforce and optimization models for their future organization success.

Historically, such insight was provided (if at all) by a locally developed set of queries and reports using spreadsheets or data warehouses and business intelligence (BI) tools. The market for spreadsheets and BI tools has developed over 20 years of hard work by a handful of large companies, such as Business Objects (now SAP), Cognos (now IBM), Hyperion (now Oracle) and Microsoft. The total product revenue in this market is about $15B annually, with perhaps another $40B in custom services that are necessary to make the BI technology work.

The challenge with this approach is a very high cost (often $10M or more), very long lead-times (often more than 2 years), and a high risk of project failure due to technical complexity. In addition, BI tools require a significant degree of technical competence from the user, which most business people do not possess.

We saw an opportunity to approach the problem differently, eliminating the services cost, complexity and the business risk. We developed a solution that delivers accurate business insights and plan alternatives to the hands of the business user, virtually instantly, with no dependency on any user technical skill. Cloud technology, coupled with in-memory and map-reduce processing, a deep knowledge of the application domain, the semantic linking of business terms and big data, and modern custom-designed graphics made the traditional BI tools based approach very vulnerable.

In Visier’s case, the combination of these new techniques actually produces a 20:1 cost advantage and significantly reduced time to success over BI, a virtually unassailable advantage.

With this kind of economic efficiency, which established player will have the appetite to jump in with both feet?

A version of John’s article first appeared in Entrepreneur on April 12, 2016. 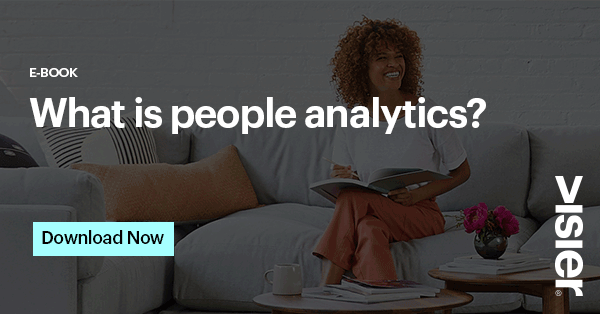 About the author: John Schwarz

During his tenure as CEO of Business Objects, John doubled the company’s revenue to more than $1.5 billion, executed seven strategic acquisitions, and negotiated the company’s successful sale to SAP. He founded Visier, building on his many years of experience to invent a new approach to answering business intelligence questions. The objective was to fix the perennial problem where business users spend a lot of money on IT and get little or no benefit in return. John is a water baby, always to be found on or in, but never more than a few feet away from a (preferably warm) ocean.

Why Workforce Intelligence Is Essential to Healthcare HR Transformation

A strong business case for workforce intelligence shouldn’t just show the HR benefits of the technology -- i.e. “It will help improve employee retention” -- but also explain to executives how the savings and gains from this investment will impact the organization’s key performance indicators.